Historically The Strength was the card number XI in the deck, but I went with the now popularized Raider Waite Tarot numbering and put it on number VIII. And I have to admit: This might have been the easiest card of all of them, at least in terms of concept. Just looking at the usual arrangement of this card, I was immediately reminded of this scene: 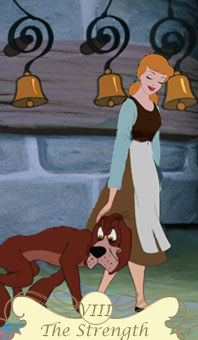 Everything about this moment embodies strength. Walking away peaceful from an alteration is strength. Convincing someone to do so just with a kind word is strength. The Card stands for courage, persuasion, influence and compassion, and there is no story and no character which embodies all those ideas better than Cinderella. To quote from Wikipedia:

“The Strength card was originally named Fortitude, and accompanies two of the other cardinal virtues in the Major Arcana: Temperance and Justice. The meaning of Fortitude was different from the interpretation of the card: it meant moderation in attitudes toward pain and danger, with neither being avoided at all costs, nor actively wanted.”

That is exactly what Cinderella does. She picks her battles. I put the bells in the background of the card as a reminder of the pressure she is under in this scene. She knows that if Bruno actually hurts Lucifer badly, she would no longer be able to protect him. So she let’s Lucifer “win” in this particular situation, but she also rescues Gus from him just a few scenes later. Cinderella’s interaction with her family is similar. Most of the time she is following orders but if an opportunity presents itself to her – be it an excuse to interrupt “music” lessons or to go on a ball – she will take it. That is in a lot of ways true strength, the ability to endure while keeping an eye out for opportunities.

The low point of Cinderella, when her dress gets destroyed, is a cumulation of everything the card stands for in reverse: Self-doubt, lack of energy and raw emotion.

The Strength is usually my favourite card in every Tarot deck, because there is something dignified and powerful about it. Next week we will discuss the maybe most introspective card of them all: The Hermit.