Well, to me there was never a doubt who would represent The Devil in my deck. After all, there is only one “Mistress of all Evil”. Maleficent even has the horns. And this time around I tried to add as many elements as possible for the original card. The result looks like this: 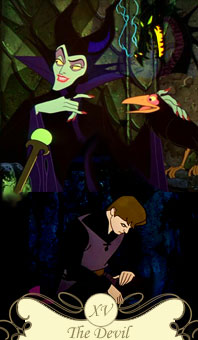 Well, there are some changes in the details. While there are two figures bound in front of the throne in the original card, their bonds are really lose, indicating that they could slip their chains if they truly wanted to. This is not the case with Phillip, he is pretty much trapped. But then, the fairies are right around the corner ready to free him.

The Devil is one of the few Tarot cards which are some sort of warning. Upright it is often seen as a symbol for attachment, addiction and restriction, but other readings interpret it as a sign of jealously and resentment, self-delusion, selfishness and violence. In a way I have put both meanings in my card, with Maleficent standing for the resentment and violence and Phillip standing for the restrictive aspect of the card.

One better hope that the card turns up in reverse, because then it stands for the release of limiting beliefs and detachment from whatever tied someone down.  In other words, it indicates that the fairies are right around the corner of your own soul.

This entry was posted on Monday, July 1st, 2019 at 9:16 am and tagged with Disney, Disney Princess, Sleeping Beauty, Tarot and posted in Disney Tarot, Extras, Uncategorized. You can follow any responses to this entry through the RSS 2.0 feed.
« Disney Tarot: The Balance
Disney Tarot: The Tower »

2 responses to “Disney Tarot: The Devil”